The following was published in the Oregonian on October 2, 2018.

The first gubernatorial debate between Democratic Gov. Kate Brown and Republican Rep. Knute Buehler showcased striking policy alignments between the rivals, as well as sharp criticisms by each of the other’s track record.

Both expressed support for using clean energy to combat global warming, restricting gun purchases, protecting undocumented residents from harm, increasing the ranks of school counselors and bolstering mental health care during Tuesday night’s debate at Roosevelt High in North Portland. Buehler noted that he broke with his party on several fronts to take a more centrist or left-leaning position.

But Brown criticized Buehler as a late-comer to caring about foster children, for voting against a “red flag” gun law that has saved lives and for telling a “whopper” during the debate about her lack of urgency about fixing the foster care system.

Buehler, meanwhile, went after the governor for failing to improve the dismal ranking of Oregon’s public schools, not delivering on promises to better integrate mental health care into the Oregon Health Plan, tolerating mismanagement at the Department of Environmental Quality, frittering away the power of the governor’s bully pulpit and failing to right longstanding wrongs in the state’s foster care system. 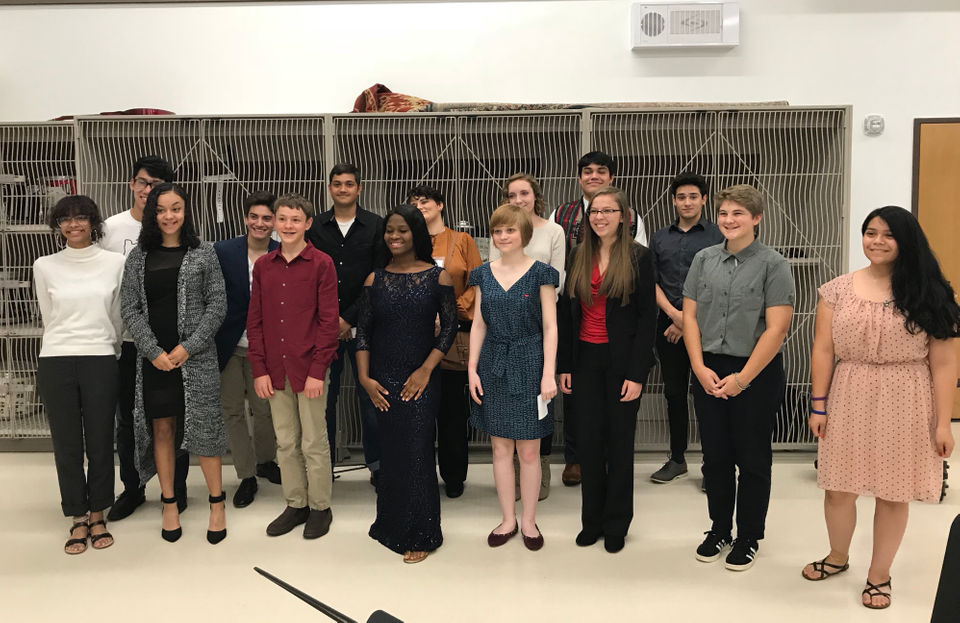 Students from across Oregon chosen to pose questions at the first debate in the 2018 Oregon governor’s race pose together backstage at the event.

Buehler said he voted against the red flag law that takes guns away from people who pose a danger to themselves or others not because he opposes that idea but because the law needed stronger provisions, including a requirement that gun owners deemed to be suicidal or homicidal get mental health treatment.

Over and over, he mentioned that he is a physician and said that gives him extra insight into the problems of suicide, gun violence, tobacco use and trauma, and how or why to address them.

Independent Party nominee Patrick Starnes touted his experience as a school board member in rural Oregon as one factor that gives him important insight and experience. He repeatedly called for a dedicated funding stream for mental health care in Oregon and for innovations in governing.

All questions were posed by young people, ages 12 to 19, from communities across Oregon. The event, dubbed “Debate for Oregon’s Future,” was organized by Children First for Oregon, KOIN 6 and Pamplin Media Group.

The questions the students posed and the solutions they sought painted a heart-wrenching picture of childhood in today’s Oregon. They spoke of their fears about the effects of climate change, their experiences with trauma and bullying, the rampant teen suicide rate, their dread of being shot at school, the shortage of dental and mental health care for foster children and their dismay that so many classmates vape at school. 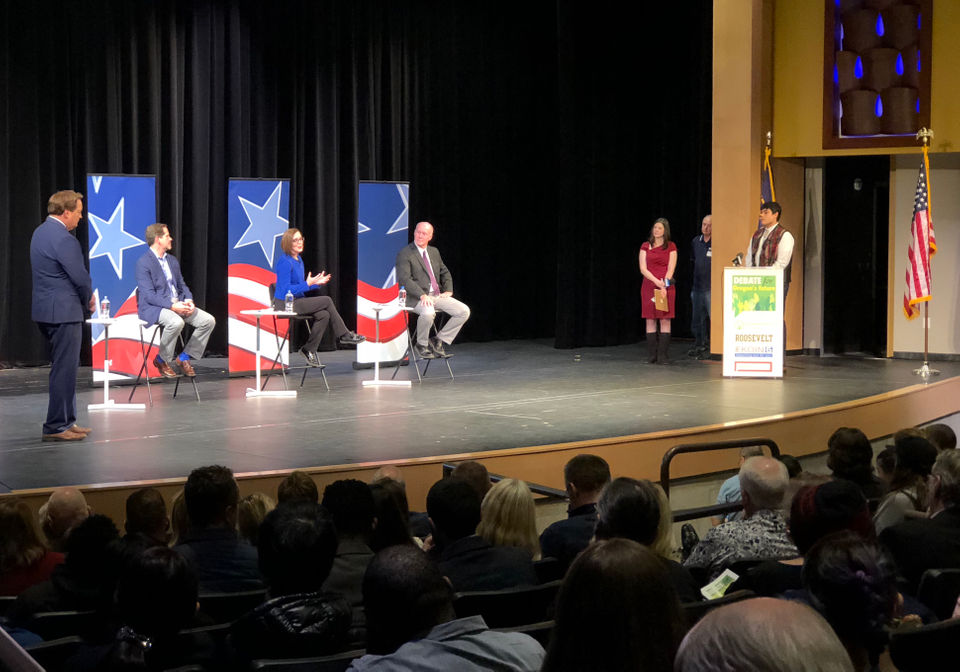 All questions at the first debate in the 2018 race for governor were posed by children and teens. Portland Tribune education reporter Shasta Kerns Moore, in red at right, introduced students including Dazon Sigo, 17, of Pendleton, at lectern, before them quizzed the candidates.

All three candidates apologized to some of their questioners and expressed sympathy for the trials they face. Brown stressed the importance of ensuring that young people’s voices are heard, both at their schools and in the state Capitol and other halls of power.

Buehler said a governor should “keep everyone safe, no matter if you are here as a citizen or here undocumented.” He called homelessness “a humanitarian and public health crisis” that has worsened on Brown’s watch, and he said providing more support to teens aging out of the foster care system would be one important fix.

Brown said 14,000 affordable apartments and homes have been built or planned during her administration and that, if reelected, she plans to spend $370 million to build affordable housing. She said her many years working as a lawyer who represented foster children gave her invaluable first-hand knowledge. She said she has directed the Department of Human Services to add more caseworkers and recruit more foster parents.

Brown said her administration is working to ink new contracts with organizations that coordinate health care for people on the Oregon Health Plan and will hold them accountable for integrating oral and behavioral health along with physical health care. Buehler said that should have happened already and that he would use financial incentives to get the health organization to deliver better results, including more preventive health care for children and teens. 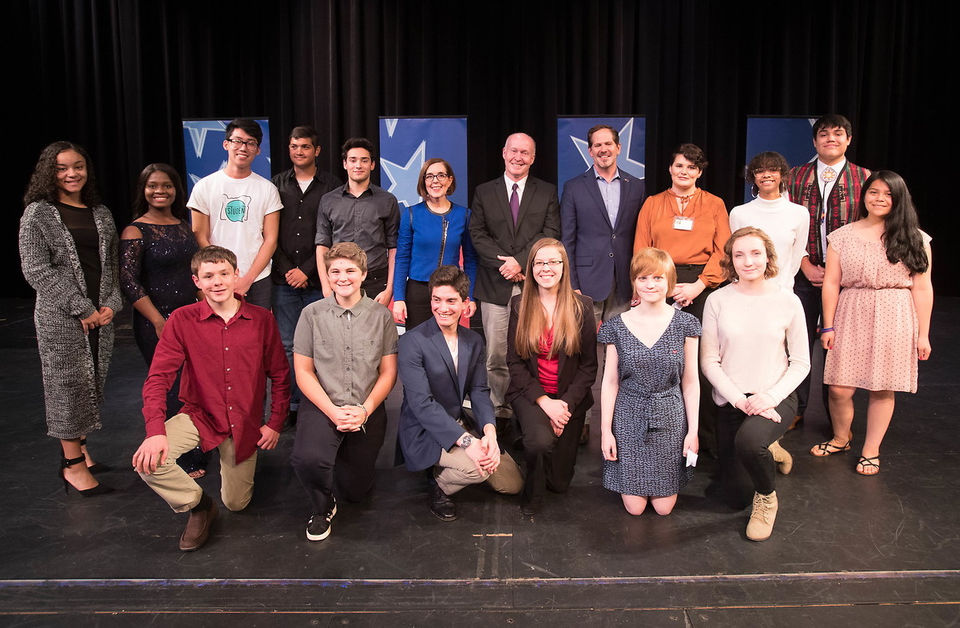 Buehler said Brown’s greatest failing has been the lack of improvement in K-12 education, and he faulted her repeatedly for not fixing a cruel and inattentive foster care system that he said is plagued by a “fear-based culture” that doesn’t support front-line child welfare workers. He said an audit released about three years into Brown’s time as governor had “devastating” findings. “We need to save foster kids,” he said.

In response to a question from Shimon Dasgupta, 16, of Portland about what adults would do to keep young people safe from gun violence, Brown and Buehler expressed support for limits on gun purchases. Both said they support a ban on bump stocks, age restrictions on buying certain weapons and keeping guns away from people who’ve committed domestic violence. Buehler said Oregon should institute a three-day delay for people to purchase hand guns.

Ways to Observe and Celebrate Juneteenth